Snapshots to Photographs: How Cameras Work

If you want to be a little creative with your photographs it may help to know just a little about how cameras work. If you think cameras should be like cars and you only need to know that you select Drive or Reverse and speed up with the gas pedal or slow down with the brake then skip this article.

The best camera to use is the one you have with you. Just about any camera or smartphone from the last five years will make good photographs. Any current digital single lens reflex (DSLR) cameras will do an outstanding job.  Most smartphone cameras have a “Macro” mode for close-ups as well as a zoom capability to bring distant objects close.

Your camera has a lens that works like your eye. The lens has an aperture (opening) that adjusts to be wide, like the iris of your eye, to let in as much light as possible when there isn’t much light available and closes down tight in bright sunlight. The physics of lenses can create a useful effect. As the aperture narrows, more of the background and foreground in a given scene becomes sharp. The area that is in sharp focus is called the “depth of field” and you can use this to create emphasis with details in your picture.  Your point and shoot camera probably has a dial with different picture “modes” on it and the one representing a mountain will use a very narrow aperture to give your picture a large depth of field with sharp focus for almost everything in view.  The picture mode of a flower or a person will typically give you a wide aperture to narrow the depth of field to a particular subject and create emphasis by blurring objects in the foreground and background.

You may already know that your camera has a shutter that opens for a brief time to allow light in through the aperture. As an object moves in front of a camera, the image projected on the sensor or film moves.  If the shutter is open for a relatively long time the moving image will be captured as a blurred picture.  The faster the shutter speed, the less time the moving image has to blur.  You can use this phenomenon to create effects – a very fast shutter speed will stop motion while a longer shutter speed (to a point) will suggest motion.  On your point-n-shoot camera, the picture mode with a running person generally means the camera will use a very fast shutter speed to stop motion.

For those who use a DSLR, it may be useful to know that the aperture in a lens is measured in f-stops.  Note that f-stop does not refer to focus or focal length, it’s just a name someone used early in the history of lenses and it stuck. The commonly used f-stops are:  f/1.0, f/1.4, f/2, f/2.8, f/4, f/5.6, f/8, f/11, f/16, f/22, f/32, f/45, and f/64.   An f-stop of 1 equates to the entire diameter of the lens for the maximum possible light.  An f-1 lens is typically called the “fastest” lens because it combines the fastest shutter speed to render a well-exposed photograph.  Each f-stop after 1 in this sequence of commonly used f-stops reduces the opening (and light) by half. Virtually no lenses are built to use the whole scale of apertures. Canon made one in the early '80s and it still sells today for about $4,000 used.  A standard zoom lens may run from f/4 to f/22 and provides several interim f-stops for tremendous flexibility in exposures.  Lenses (and cameras) tend to get much more expensive if they have f-stops lower than 3.5 but those are the ones that allow more creativity by blurring backgrounds and working in low light situations.

Your camera combines shutter speed and aperture size to allow light in and capture an image on a sensor or film.  The last variable in this combination is the sensitivity of the sensor or the speed of the film itself to capture light. This is measured in ISO (for digital sensors) and ASA (for film) terms. Point-and-shoot cameras usually don’t bother you with controls over this function and generally use 100 ISO.

A DSLR typically uses 100 ISO or 200 ISO for a base level and will allow you to dial up the sensitivity so you can make pictures in low light situations. You may recall that you had to buy a roll of film with your desired sensitivity (e.g. 400 ASA) so you had to change film rolls to adjust light sensitivity. If you do have this control in your camera, use it judiciously because increasing the sensitivity to very high levels could result in “grainy” photographs.  You may be able to correct that with your computer but that can be over worked and create a poor quality picture.

Have you ever made some pictures with people who have a slight green tinge but who were not really sick? It is probably because the lights in the room are fluorescent and your subject was near a window with sunlight streaming into the room. Your camera is interpreting reflections of light to create color and tone in your picture but will “normalize” the color to those created by sunlight. If there are multiple light sources, it will often get confused and not blend them together like your eyes and brain see them. An incandescent bulb will create light that is slightly yellow, fluorescent tubes and CFL lamps will create a green light, and tungsten lamps (often used in arenas and industrial buildings) create blue light.  With some point-n-shoot cameras and most DSLRs you can adjust your camera settings to specify the “color balance” for the light sources in your setting.  You can also adjust the color with your computer with the software that came with your camera or packages you can buy separately like Adobe Photoshop Elements or Lightroom.

Your digital camera has a sensor made up of picture elements (pixels) that detect the light in its various colors and combine them into your picture.  When your eye sees them, your brain automatically interprets the patterns of dots to blend them into an image. Camera companies have created some hype around the resolution of their cameras that leads people to believe the more pixels the better, to make the photograph easier for your brain to interpret. Much more important than resolution is clarity (in focus and not blurred by motion) and tone and color.  There were a lot of great photographs produced with 2 and 3 megapixel sensors when digital cameras first became popular.

Two things will cause trouble with this push for higher resolution.  First, the materials available to use for sensing light have some physical limitations so they lose their light sensing capabilities if they are too small.  This can affect the color and tone of your photographs. Camera manufacturers get around this by correcting problems introduced by small pixels with software that interprets tones and color patterns and fills in where the sensor pixels did not detect any light or where it seems out of place (grainy). The second issue is that the actual picture will likely be produced on a printer that works at 300 dots per inch or displayed on a monitor that is 1080 vertical dots, or about 90 dots per inch on a 12 inch tall monitor. Either way, the product of all your thought and creativity could be a reinterpretation of an image created by your printer or monitor’s software programmer that blends some of the original pixels that were interpreted by your camera’s software programmer.

Cameras and cell phones use different size sensors and increasing megapixels on smaller cameras and phones compound the software interpretation.  The illustration below shows the relative size of sensors in different types of cameras. 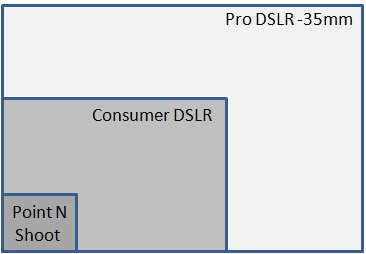 The pixels on an 8 megapixel smartphone camera are dramatically smaller than the pixels on an 8 megapixel consumer DSLR and consequently require a lot more interpretation and software manipulation.  These photos may look grainy and have digital “noise” compared to those made with a DSLR like a Canon Rebel or a Nikon D3200 or the professional DSLRs that use a sensor the size of 35mm film. Photographs printed as 4x6 or 5x7 or displayed on a monitor (e.g. facebook) generally will not be affected by this interpretation of details. Enlargements may be affected so this is actually only a consideration if you are thinking of putting your photographs up on the walls of your home or office.

Now you know a little about how the camera works so you can use it to your advantage, or at least keep the camera from taking advantage of you.  Happy shooting!